The Central Bank of Poland has admitted that “it carried out a campaign on the issue of virtual currencies in social media;” in other words, they paid social media big shots in the country for propaganda against cryptocurrencies which alludes to market manipulation.

A Polish YouTuber, Marcin Dubiel, with around one million subscribers, was paid $30,000 by the Central Bank of Poland, in collaboration with the Polish Financial Supervision Authority, for propaganda to portray cryptocurrencies in a negative light.

Dubiel, whose video “I lost all my money” has half a million views, represents cryptocurrencies as a way to get rich quick, to only find out he had no money to pay for a date at a restaurant and was generally left penniless due to his cryptocurrency investments.

The video’s description box contains the hashtag #uważajnakryptowaluty, which is a website by Poland’s Central Bank and FCA that portrays digital currencies as risky, having no guarantee, and not classified as electronic money. Only two of those truly apply, as with cryptocurrency you are not guaranteed any gains, and it is certainly risky; but to argue it’s not electronic money would be silly.

Dubiel’s payment was not disclosed in his video, and the Central Bank of Poland did not issue any further comment.

Dubiel is just one among many others who received such payments, including Planeta Faktów, a YouTube channel with 1.5 million subscribers.

This comes after JP Morgan has released what has been dubbed a “Bitcoin Bible” for investors, in which JP Morgan concedes that cryptocurrencies aren’t going away anytime soon.

“CCs (cryptocurrencies) are unlikely to disappear completely and could easily survive in varying forms and shapes among players who desire greater decentralization, peer-to-peer networks, and anonymity, even as the latter is under threat.”

Jamie Dimon, the CEO of JP Morgan, stated in January that he regretted calling Bitcoin a fraud and believes in the technology behind it.

Dimon has consistently made headlines calling Bitcoin a fraud, so much so that he faces a lawsuit for market manipulation in Sweden for his remarks. Will Poland’s Central Bank face similar charges?

Meanwhile, the rest of the central bankers have all developed their own opinion on cryptocurrencies with the lead head of the Bank for International Settlements, Agustín Carstens, calling for a “clampdown on cryptocurrencies “piggybacking” on mainstream institutions and becoming a “threat to financial stability.”

This comes as the G20 prepares a meeting where world leaders are expected to talk about cryptocurrency regulations in March, News Bitcoin reported.

As a reminder for the bankers, the president of the European Central Bank (ECB), Mario Draghi, admitted in September of last year that central banks have no power to regulate Bitcoinf: “it’s outside of our jurisdiction.”

Bitcoin is currently trading at [FIAT: $11,162.80] according to Coin Market Cap at the time of this report. 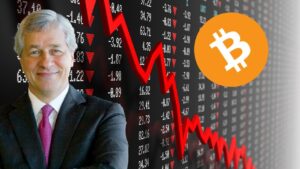 The CEO of JPMorgan Chase bank Jamie Dimon called bitcoin “a fraud” last week and his firm Bitcoin XBT subsequently purchased Bitcoin on the dip. Because of this he may have broken European market abuse laws by shooting his mouth off talking about something he doesn’t understand and causing a flash crash according to a complaint filed to the Swedish financial regulator, Quartz reported.

The complaint was filed by Florian Schweitzer, the managing partner of a London firm called Blockswater.

The issue is an alleged link between Dimon’s comments and a large volume purchase a few days later of the Bitcoin tracker fund Bitcoin XBT. Bitcoin XBT is an exchange-traded note that’s listed on Nasdaq Nordic in Stockholm. The fund allows its clients to hold Bitcoin without worrying about how to securely store it.

However, JPMorgan denies this effort stating that it was just acting as a broker for its clients:

“They are not JPMorgan orders,” a JPMorgan spokesperson told Reuters. “These are clients purchasing third-party products directly.”

When Dimon made his inarticulate comments backed by no factual information about Bitcoin the market tanked; Bitcoin lost at least 25% between the day of his comments and the XBT trades. Another key factor of the market bloodbath we witnessed last week was China’s rumors about outright banning the cryptocurrency, after banning ICOs and exchanges, as well as more speculation the country was seeking to ban mining.

Now again today, Dimon has made further comments about Bitcoin calling the cryptocurrency “worthless” adding that there would be a government crackdown soon.

Dimon told CNBC he is concerned about a flood of cryptocurrencies – thanks to Bitcoin, Ethereum and initial coin offerings (ICOs) – and stated that believes governments will soon crack down on the market.

“Right now these crypto things are kind of a novelty. People think they’re kind of neat. But the bigger they get, the more governments are going to close them down,” Dimon said.

“I am talking about the creation of money and value out of thin air,” he continued. “Governments now look at it like it’s a novelty but the bigger it gets the less of a novelty it becomes.”

The markets are up so far, Bitcoin is currently trading at $3601.63 at the time of this report according to Coin Market Cap.

If found guilty JPMorgan’s CEO may be facing up to two years in jail according to Schweitzer. We here at Coinivore wonder how Dimon can explain the Federal Reserve and other central banks doing just that – “printing money out of thin air” – since no banks are backed by silver and gold anymore.

Cryptocurrency creates wealth from mining, the market speculators and the overall technology behind the coin. How about that outdated fiat?

The real problem is that cryptocurrencies put power back into the people’s hands and that with cryptocurrency decentralization we don’t need central banks or banks like JPMorgan anymore. The cryptocurrency sphere needs to stop listening to these elitists letting their comments affect cryptocurrency and just move forward with replacing them. Dimon just keeps on digging and digging his fiat grave.