Bitcoin exchange risk has been a hot topic of discussion among Bitcoin circles over the last two years. The string of thefts and/or embezzlements that have occurred since Mt. Gox has left a stain on the Bitcoin brand not easily removed any time soon. Exchanges have been unwilling or unable to work together to come up with a standardized procedure to protect users as an industry, and external regulators have seen fit to step into this void.

The newly-launched, New York-based Gemini Bitcoin exchange, the creation of Tyler and Cameron Winklevoss, has had a rough go of it. Maybe it is because they are based in New York, which seems to be one of the most difficult places to work in the digital currency realm. Or maybe it is their desire to have every base covered, from regulation nationwide, to their interest in servicing every potential customer’s Bitcoin needs, from Main Street to Wall Street. They want to grow the Bitcoin industry, and not leave any potential long-term consumer, or revenue, behind.

Coinivore sent you $10 USD in bitcoin! Claim it Here (Ad)

“It’s important to us because we are the custodian of all of the digital assets that are deposited on Gemini and we wanted to get that right,” said Tyler Winklevoss to New York Business Journal’s Michael del Castillo. “Our chief security officer, Cem Paya, was the head of security at AirBNB, and previously worked on the Google Wallet and at Microsoft, and we’ve been building with security in mind from the beginning.”

The Winklevoss twins have deployed a four-step approach to fiduciary security and responsibility for Gemini that will soon be the envy of the Bitcoin exchange industry. The first step is something that the rest of the industry is doing already, and that is extensive “cold storage” of users Bitcoins. “Cold storage” means the Bitcoins are kept off-line for maximum security in an “air-gapped” device that has never been online. The daily transaction amount for the exchange is kept in a “hot wallet”, online, for convenient access.

“If your funds are off-line, air-gapped, in cold-storage, then someone physically has to gain access to a storage facility,” Tyler said. “And even then, because we’re using multi-signature technology you’d have to compromise, and get access to more than one.”

Another common Bitcoin security technology is multi-signature, or “multi-sig”, which will not allow the exchange to have the private keys or all keys. The keys are shared by more than one party for Bitcoin security. This can include two or more keys, held by two or more parties.

Step Three is where Gemini starts to pull away from the pack. They use the term “Geographic Distribution” to describe their storage of consumer’s Bitcoins, meaning they aren’t all in one place or even one-time zone. Multiple “vaults” in multiple places throughout the country adds another layer of security.

“We feel like statistically, we have our bases covered in the sense that catastrophic events will not render the vault unavailable,” said Winklevoss. “We took a lot of efforts to make sure that it was diverse and distributed so that one disaster situation wouldn’t cripple the system.”

The final stage is where they are really looking to innovate by using custom-made computers specifically designed to protect Bitcoins. They are called “Crypto-processors” and will “brick-out” if they are tampered with, so an unknown attacker still cannot gain access through a cyber attack or hack.

The Winklevoss Twins believe that Bitcoin value will improve greatly in the long run, and their new American-made, American based exchange could be a game-changer. While Gemini will be charged with serving all those new to Bitcoin, an influx in demand from the deep pockets of Wall Street from a local, branded exchange can only help Bitcoin’s appeal.

“I think that if we can make good on our plan to build a great exchange that Wall Street can use, then I believe more institutional money that comes into Bitcoin and actually starts using it as a financial instrument should create positive price action,” Tyler tells the International Business Times.

Many believe Bitcoin price has to go up due to its built-in scarcity of creation. Bitcoin’s value tends to grow based on simple supply-and-demand economic principles, and if more money flows into Bitcoin while fewer Bitcoins are produced over time, values must appreciate. The rate of which is unknown, and the rate at which “miners” may sell Bitcoins to pay for their overhead may counter-balance this with a real-world downward market price pressure. Yet, in the long-run investing in Bitcoin for appreciation is a safe bet.

“It’s a self-fulfilling prophecy. Liquidity begets liquidity and all of a sudden the markets are bigger and more mature and the more blue-chip financial firms can start feeling comfortable getting involved. I think that there is a lot of potential for the price to go up. I don’t have a crystal ball, but the price could look totally different in the future; the current price would look completely like a steal.”

A main ingredient in the desire to own Bitcoins by the market at-large is making them easier to buy and sell, and easier to keep secure. Tyler and Cameron Winklevoss seem destined to create a safe environment to begin a new Bitcoin investment in one of the world’s largest Bitcoin markets with Gemini. The Gemini exchange is finally ready to protect and serve the Bitcoin community, after almost a year in regulation purgatory. In so doing, maybe digital currencies, not just “The Blockchain”, are that much closer to the mass adoption many within the industry seek. 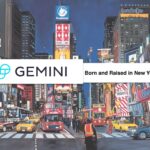