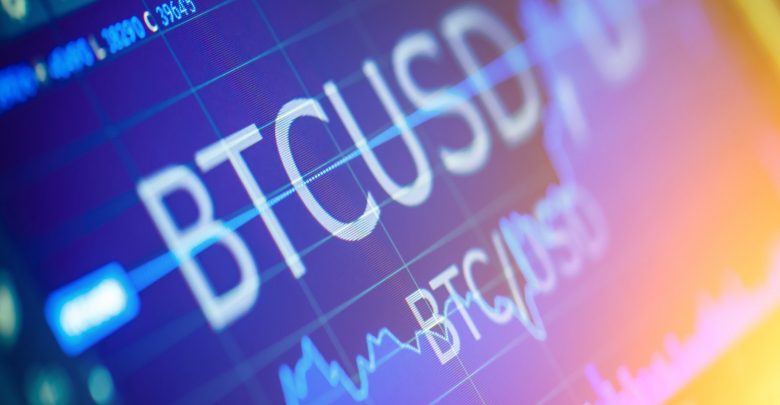 Nearly a year ago we highlighted a schism in generational views toward “fiat alternatives”: whereas older Americans would buy physical gold and precious metals, younger generations, including Millennials and Gen-Zers would primarily purchase cryptocurrencies such as bitcoin. To this point, Charles Schwab showed that the Grayscale Bitcoin Trusts is the 5th largest holding in Millennials retirement accounts (including 401(k)s) with almost 2% of their assets tied to the success (or failure) of the largest cryptocurrency.

And now that Bitcoin is back over $13,000 for the first time since the infamous “spike” of Dec 2017, breaching the previous high of June 2019, following this week’s endorsement by Paypal – which in turn followed corporate support from Square and MicroStrategy – none other than JPMorgan’s quant Nick Panigirtzoglou writes in his closely followed Flows and Liquidity that all of this “is another big step toward corporate support for bitcoin, which in our opinion would facilitate and enhance over time Millennials’ usage of bitcoin as an “alternative” currency.” 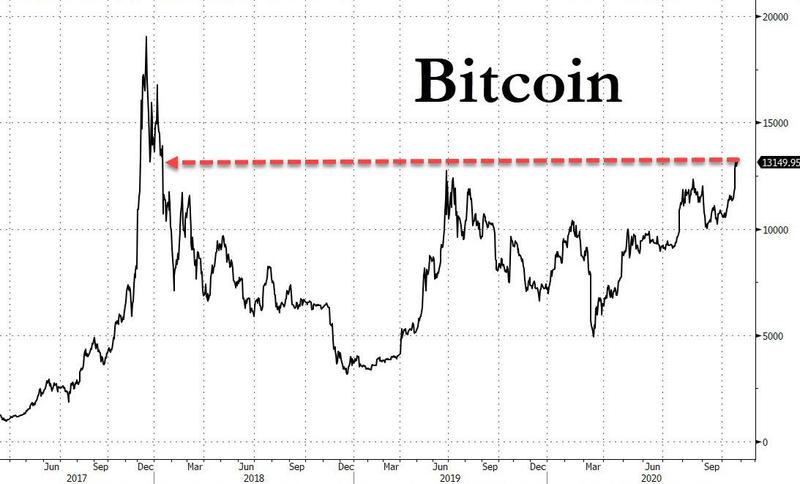 Which brings us to the focus of the JPM quant’s note, which is rather familiar as it is precisely what we discussed back in 2019: namely the divergence between the behavior of the older vs. younger cohorts of the retail investors’ universe in their preference for “alternative” currencies. 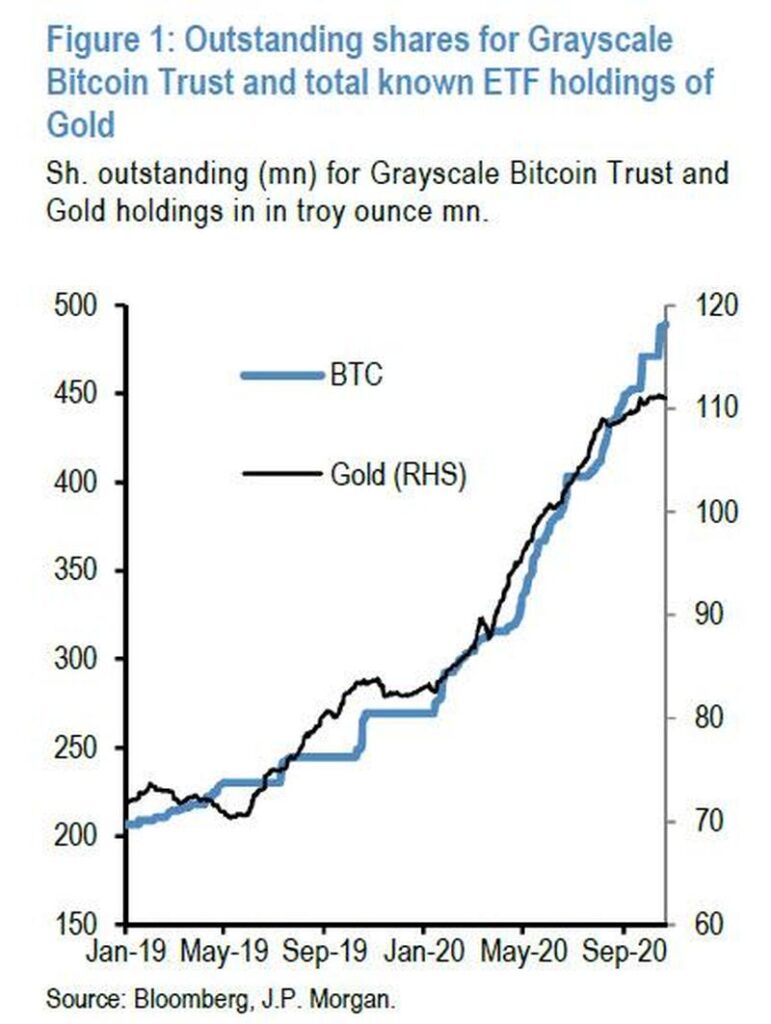 Panigirtzoglou then notes several correlation shifts as a result of this concurrent inflow:

It’s not just bitcoin though: gold’s correlation with the S&P500 has been predominantly positive this year and its volatility at 20% is more similar to that of equities than currencies or bonds (Figure 3).

In other words, according to JPM, both bitcoin and gold could be increasingly characterized as “risk” rather than “safe” assets based on their behavior this year and (mostly young) investors’ preference for them is likely more of a reflection of a need for an “alternative” currency rather than a need for a “safe” asset or “hedge”.

This means that when it comes to millennials, there is an entirely “untapped” market from the perspective of utility, and as the JPM strategist predicts, bitcoin could compete more intensely with gold as an “alternative” currency over the coming years given that millennials will become over time a more important component of investors universe .

Whether or not that would result in weakness for gold is a different matter, but given how big the financial investment into gold is at the moment, a crowding out of gold as an “alternative” currency implies big upside for bitcoin over the long term.

Here, Panigirtzoglou calculates the total market capitalization for bitcoin is $240bn. While superficially this makes it comparable to the total size of gold ETFs at $210BN, this is erroneous since the bulk of gold as an investment is not in the widely derided “paper gold” class but physical. And indeed, as JPM notes, gold ETFs is not the main way wealth is stored via gold; instead wealth is mostly stored via gold bars and coins the stock of which, excluding those held by central banks, amounts to 42600 tonnes or $2.6tr including gold ETFs.

This means that mechanically “the market cap of bitcoin would have to rise 10 times from here to match the total private sector investment to gold via ETFs or bars and coins”, and while that may be optimistic (it would send the price of bitcoin to $130,000), even a modest crowding out of gold as an “alternative” currency over the longer term would, according to JPMorgan, imply “doubling or tripling of the bitcoin price from here.”

In other words, as Panagirtozglou summarizes, “the potential long-term upside for bitcoin is considerable as it competes more intensely with gold as an “alternative” currency we believe, given that Millennials would become over time a more important component of investors’ universe.”

Contrary to Bloomberg’s traditionally myopic take on cryptos (which just today was out with the amusing “Bitcoin Resurgence Leaves Institutional Acceptance Unanswered“), the JPM quant then writes that Millennials and corporates endorsement of bitcoin have also induced greater interest by institutional investors as evidenced by the spike in activity across both bitcoin futures and options at CME, and that was before Paypal’s announcement this week.

JPM calculates that CME bitcoin futures open interest averaged a record of 10.5K contracts per day in Q3, up 32% compared
with Q2 and up 127% vs. Q3 2019. Institutional flow in particular saw strong growth, with 692 new accounts added. The number of large open interest holders averaged 79 in Q3, up 64% compared to Q3 2019. 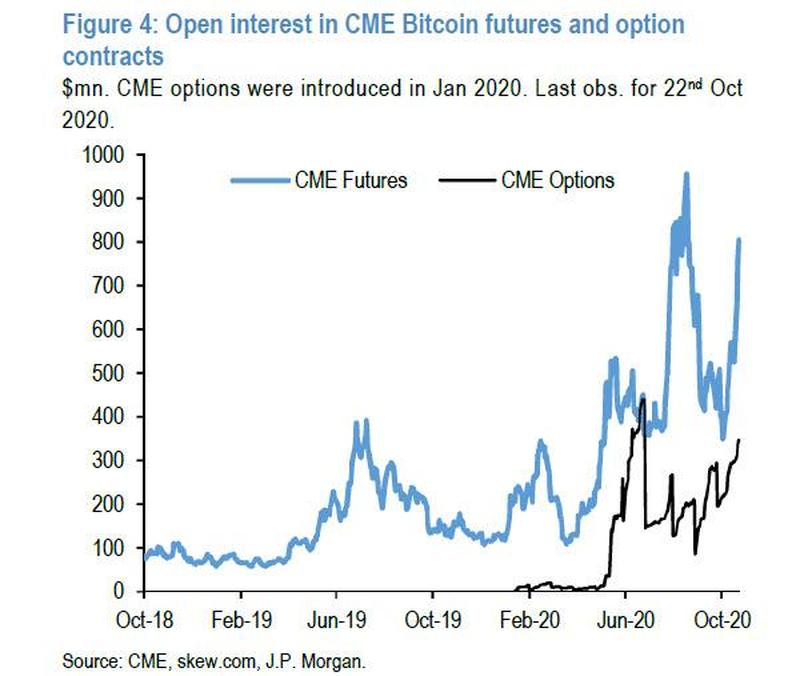 Meanwhile, JPM’s proxy for CME futures contacts is shown in the next chart. This position proxy spiked to a new high for the year as the bitcoin price breached $13k following Paypal’s announcement. In other words, JPM warns that for the near term, bitcoin looks “rather overbought and vulnerable to profit taking.”

Of course, the near-term selling would be only temporary, because as JPM concludes “the potential long-term upside for bitcoin is considerable we think as it competes more intensely with gold as an “alternative” currency given that Millennials would become over time a more important component of investors’ universe.”

And the punchline: “Mechanically, the market cap of bitcoin would have to rise 10 times from here to match the total private sector investment to gold via ETFs or bars and coins.”