At the time of this writing, the cryptocurrency known as Bitcoin has seen its value skyrocket to around $18,000 (11/19/2020 12 AM EST) after dropping down to around just $4,840 in mid-March. This is significant because the all-time high for the cryptocurrency is $19,783 back in December of 2017, only to drop down to as low as $3,122. Within the past year, the price of Bitcoin has doubled, posting close to $10,000 in growth with over half of that value occurring within the past month at the time of this writing.

With most of the news attention on Covid-19, the presidential election, and so on, it is understandable that the meteoric rise of Bitcoin may have slipped past casual observers as it did not receive the attention it received in 2017. However, what makes this rapid growth interesting is that there are a number of important circumstances that might be paving the way for Bitcoin to sustain its ongoing trend.

It is undeniable that the monetary limits of fiat currency are being tested around the world as governments print trillions of dollars for stimulus packages in reaction to Covid-19. The World Resources Institute writes:

“In response to the massive economic contraction stemming from the coronavirus (COVID-19) pandemic, some central banks — including those of the United States, European Union, Japan and other major economies — are engaging in “quantitative easing” (QE) programs on an unprecedented scale.”

The United States alone has printed trillions of dollars and has far outspent what it has brought in with tax dollars, creating an unprecedented level of debt.

“For the first time U.S. debt is now about equal to GDP (Gross Domestic Product), like the sound barrier we once thought if we hit it we might explode.”

This level of spending and money creation has likely driven many investors to Bitcoin, as it may serve as a safe haven as the value of fiat currencies like the US dollar comes into question. Furthermore, it is uncertain how the stock market, which has been the main beneficiary of quantitative easing, will react when such policies eventually subside.

Since the 2008 recession, money injections from the Federal Reserve have continued at a constant rate and the value of the S&P 500 has moved in step with spending. This creates a disconnect between financial markets and the actual productiveness of the economy. Bitcoin may serve as an alternative investment vehicle for those who are wary of an unsustainable securities market. 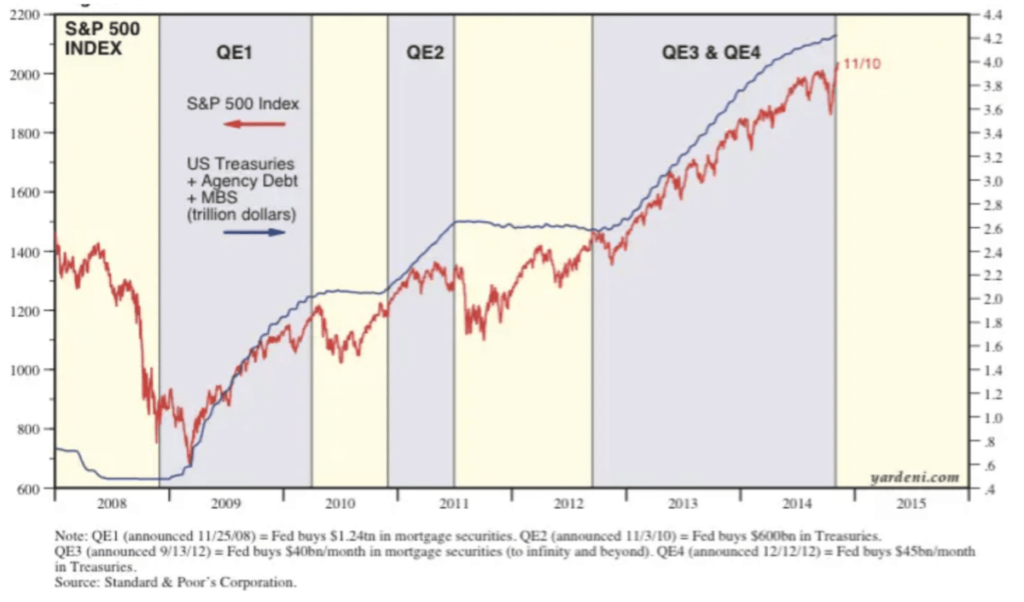 An article in MarketWatch explains that:

“Worries that governments are printing heaps of money to paper over problems created partly by the 2008 financial crisis was at least part of the reason that bitcoins were created over a decade ago. That thinking is also the basis for this resurgence in bitcoin, crypto experts said, as the COVID-19 pandemic forces governments and central banks to spend to limit the economic hit.”

Such caution is not unfounded as the Federal Reserve’s balance sheet has ballooned to unprecedented levels in the past few months, going from $4.31 trillion to $7.18 trillion. 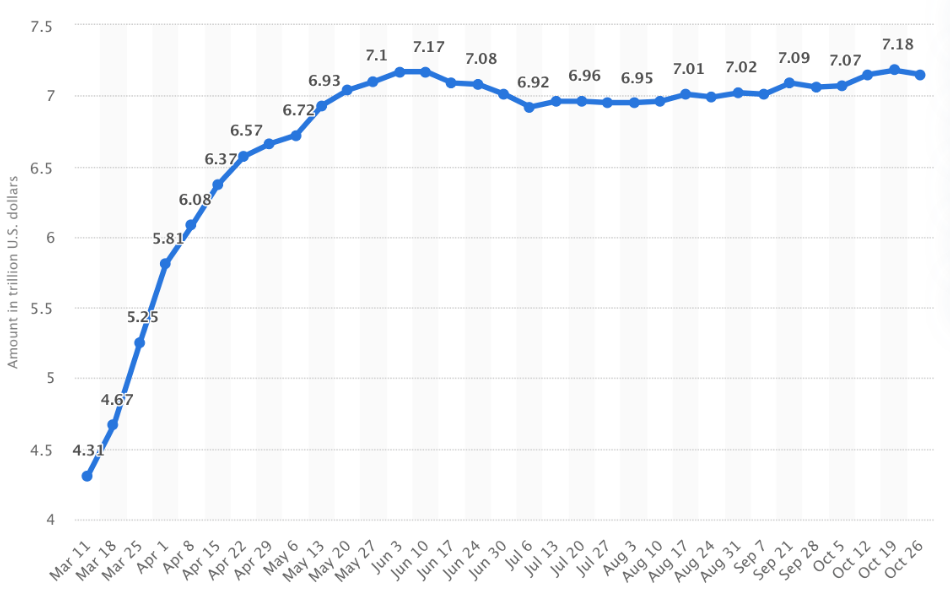 The monetary policies post-2008 kicked off interest in cryptocurrencies and it would not be irrational to assume that the current policies would be encouraging an accelerated timeline for the adoption of Bitcoin.

Perhaps the most significant development that may be supporting a potential sustainable growth trend for Bitcoin is the ongoing adoption of cryptocurrencies.

Market Insider reports that major companies like PayPal are making moves to incorporate cryptocurrencies into their services when they write:

“PayPal recently said that users on its platform will be able to purchase bitcoin, as well as other sister cryptos like ethereum, Bitcoin Cash and Litecoin. PayPal’s decision last month was a further recognition of the legitimacy of digital currencies, crypto enthusiasts say.”

“Today bitcoin has gotten to a place where institutional investors, banks, and family offices are legitimately pondering involvement as a defense against currency devaluation,” wrote Alex Mashinsky, CEO of Celsius Network, in emailed commentary.

“This isn’t a gold rush anymore, it’s a good investment,” he said. He predicts that bitcoin will hit $30,000 by the end of next year.”

Perhaps one of the main dangers of cryptocurrencies is the fact that at the moment they are difficult to use and are rarely accepted anywhere. A lack of mainstream adoption may have explained the rapid fall of Bitcoin in 2017 as market hype diminished and investors understood that there was not much real value at the time. With the ongoing adoption of Bitcoin by major firms like PayPal, the growing value of Bitcoin may actually be justified.

PayPal isn’t the only company to move towards cryptocurrency. CNBC reports:

“Payment company Square is buying a large block of bitcoin, an unusual use of corporate cash.

Square said Thursday it bought 4,709 bitcoins, worth approximately $50 million. This represents about 1% of Square’s total assets as of the end of the second quarter of 2020.

“Square believes that cryptocurrency is an instrument of economic empowerment and provides a way for the world to participate in a global monetary system, which aligns with the company’s purpose,” the company said in a release.”

Not only does Square’s investment in Bitcoin demonstrate ongoing adoption by relevant financial tech firms, it also highlights one of the key benefits of Bitcoin. This is that it provides a universal and discreet form of value that individuals all around the world can access. Bitcoin is not only easy to transfer, but it is largely immune to manipulation, which makes it ideal for those who live in countries with less reliable monetary regimes.

Even large established banks like JP Morgan are starting to experiment with cryptocurrencies as Yahoo Finance reports:

“Indeed, at the DealBook Summit on Nov. 18, (Jamie) Dimon said, “The blockchain itself will be critical to letting people move money around the world cheaper. We will always support blockchain technology.”

In May, JPMorgan went a step further when it began allowing customer transfers to and from Coinbase and Gemini, two U.S.-based regulated crypto exchange sites. And Dimon on Wednesday acknowledged that some “very smart people” are investing in bitcoin these days.”

This stands in contrast to his comments in 2017 where CNBC reports:

“In September 2017, about three months before bitcoin hit an all-time high of nearly $20,000 per unit and crashed shortly thereafter, Dimon dropped a bomb on the crypto world. He called bitcoin a “fraud.””

Cryptocurrency and blockchain technologies seem to be demonstrating undeniable advantages that cannot be ignored for long. These technologies will likely continue to grow in use, which gives further support to the ongoing growth of Bitcoin. Market Insider reports that one person, in particular, billionaire Mike Novogratz, believes that Bitcoin could be heading as high as $65,000.

With unprecedented levels of quantitative easing and debt, combined with gradual mainstream adoption, it should not be controversial to say that Bitcoin might have some substance to back its meteoric revival. It is highly likely that in 2017 the world needed a couple more years to get acclimated to the idea of cryptocurrencies. It seems that for the most part they are here to stay and they will likely see further use.

With that said, that does not mean that Bitcoin and cryptocurrencies, in general, are guaranteed or even likely to continue on their current growth path. Much like 2017, it is highly likely that market hype is a contributing factor to the growth of Bitcoin and it remains to be seen how far investors are willing to take this bull run. It is uncertain how much, if at all, the price of Bitcoin may drop or where its next peak will be. It could be at $20,000 or it could be at $65,000, or it could just keep going.

Market Insider cites billionaire investor Ray Dalio when he notes that cryptocurrencies are still far from attaining widespread adoption and that governments may pass regulations that cripple the value of Bitcoin and other cryptocurrencies.

As with all investments, there are risks involved, especially when there is the potential for great reward as in the rapid rise of Bitcoin. Regardless of what happens, the swift growth of Bitcoin signals a number of important financial milestones as well as warning signs. Signals that not only lend some support to the cryptocurrency’s value but also provide important insight into our current state of financial affairs.

Ethan Yang writes for AIER where this article first appeared.

Buy Bitcoin with a Credit or Debit Card Here 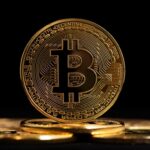