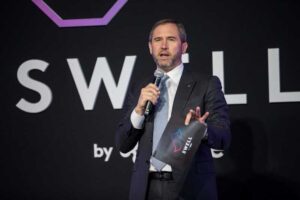 Ripple worked recently on a blockchain distributed ledger trial with the Bank of England after earlier this month hosting officials from more than two dozen central banks at a blockchain summit in New York called The Central Bank Summit on Blockchain.

“The Summit provided an opportunity to explore the full payments landscape: central banks’ domestic trials, Ripple’s growing cross-border network and interoperability across systems. Together, these form the beginning of an Internet of Value, where payments move as easily as the data across the internet.”

The Summit started with a presentation from the International Monetary Fund (IMF) on fintech’s potential to change the market structure, opening new possibilities in payments, Ripple’s website wrote.

Ripple gave detailed presentations on how they use blockchain-based solutions to enable connectivity in payments. Ripple solutions connect the following according to its website:

Ripple Chief Executive Officer Brad Garlinghouse concluded, “These blockchain conversations have been happening in isolation. The value of the Central Bank Summit was in exploring and connecting these efforts, as together they create the next generation of payments.”

Garlinghouse recently spoke to Bloomberg where he expressed that it was a matter of time until encrypted distributed ledgers catch on with central banks around the world but the questions remains how soon that will take a footing.

“As the technology, which is based on encrypted distributed ledgers, catches on, central banks around the world will be afraid to miss out,” Garlinghouse said Thursday in an interview with Bloomberg.

“Once that movement takes hold, that acceleration goes quickly,” Garlinghouse said on the sidelines of the Singapore FinTech Festival. “Is it one year or is it five years? It’s probably somewhere in between.”

In September, Ripple expanded its business into India by opening a new office in the city of Mumbai and naming former banking executive Navin Gupta to lead the operations. Last month in October, Ripple also met for the Swell event in Toronto, Canada where former head of the Federal Reserve Ben Bernanke spoke about the implications for digital currency and the banking world.

Last year in April, Wall St tested digital currency in a secret meeting with more than 100 executives from some of the world’s largest financial institutions to experiment with a software that changed U.S. dollars into digital currency to trade on the stock market. While Russia and China have both announced plans to implement a digital fiat cryptocurrency.

Recently world leaders met at the APEC (Asia-Pacific Economic Cooperation) summit where they discussed the future of the economy; one can only speculate that they talked about the implementation of digital currency within the next few years. While Ripple will be used to move fiat around it will eventually be used to move digital fiat around.