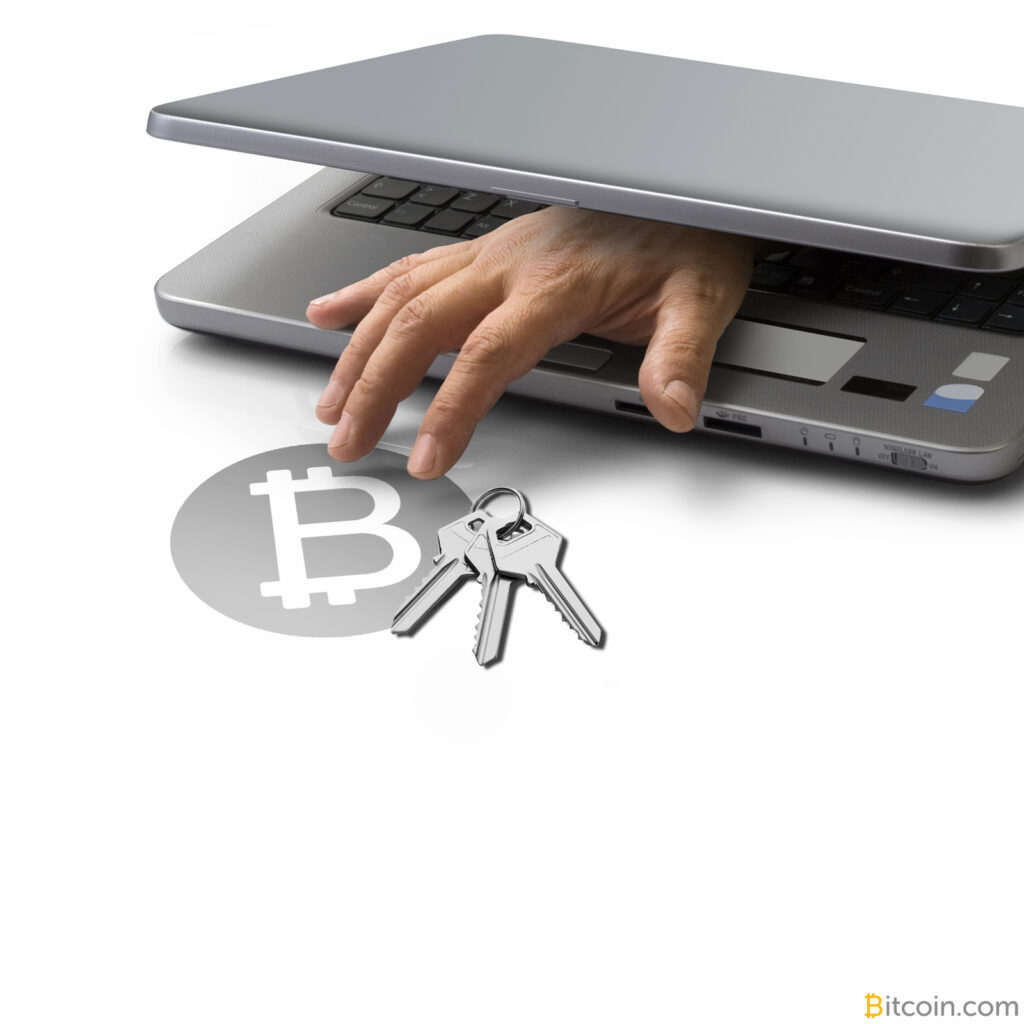 A transfer on the blockchain is a simplistic peer-to-peer contract, which memorializes the terms for those involved and is seen to be valid by the surrounding community through transparency. It is a voluntary exchange. The blockchain is also an instrument of enforcement that embodies the terms of execution, such as irreversibility, to which both parties have agreed; their agreement is expressed through the willingness to use the blockchain. Thus the blockchain expresses both requirements of libertarian law; it facilitates voluntary interaction and it acts as an instrument of enforcement.

The late Samuel E. Konkin III (SEK3), the father of agorism and an old drinking buddy of mine, used to answer his telephone with the salutation “Smash the State.” And, yet, his lifestyle did not include direct confrontations with authority. Whenever possible, SEK3 avoided or replaced the state in his daily life, because he knew that the most effective way to smash the state was to render it irrelevant. His lasting legacy to anarchist theory: Agorism is a peaceful revolution that is achieved by counter-economics, which SEK3 defined as “the study or practice of all peaceful human action which is forbidden by the State.” Counter-economics is a black market version of Ludwig von Mises’s praxeology—the study of human action that flaunts the state.

SEK3 would have reveled in the audacity of cryptocurrency, which both avoids and replaces state fiat because being a better currency is the surest way to destroy fiat. He would have declared crypto to be the “counter-economic currency”–the currency of agorism. But more than this. In a flash, SEK3 would have recognized crypto’s implications for justice, because it also avoids and replaces state law as the default position for contracts. The default position becomes the free market or agorism. I can see SEK3 take a swig of black beer and a drag on his constantly present pipe, before announcing that anarchy had arrived.

The message of anarchism never should have been “smash the state” or “convince everyone to become an anarchist.” Those are impossible ends. The message should be “free yourself” by decentralizing the power expressed by every decision into your own hands. To the extent you can act as though the state does not exist, it does not.

The Basis of a Free Society

The contract is the basis of anarchist law because it is tangible evidence of the consent of individuals, upon which a free society rests. That’s why it is essential to decentralize contracts under the direct control of participants. The blockchain is a self-executing transfer, with immutable and transparent terms that are dictated by the users rather than by the jurisdiction of a state; it can become a self-executing agreement through the addition of a smart contract. (Note: smart contracts are still a developing technology, but proof of principle is definitely there.) The blockchain is its own defense against fraud and theft, largely because it bypasses trusted third parties, who are the overwhelming causes of corruption.

A Brookings Institution article asks, “Can Cryptocurrencies and Blockchain help Fight Corruption?” Pointing to accountability and transparency, it presents a practical example of how the blockchain prevents fraud. “If a government decides to construct a road, it can now track how each dollar is being spent, identify all the users of the funds, and ensure that only those authorized to spend money do so on originally intended expenses within the permitted time. Fraud and corruption investigations that now take on average 15 months could be performed at the touch of a button and at a fraction of the cost.”

The blockchain is part of a growing push to minimize the need for lawyers and courtrooms. An article in Futurism, entitled “An AI Law Firm Wants to Automate the Entire Legal World,” explains another aspect of the trend—an automated service called LawGeex. “On LawGeex, users upload a contract and, within a short period of time (an hour on average), they receive a report that states which clauses don’t meet common legal standards. The report also details any vital clauses that could be missing, and where existing clauses might require revision. All of this is calculated by algorithms.” For a modest fee, algorithms can detect clauses that enable fraud or provide inadequate protection. It can vet smart contracts before they are coded.

The Lingering Reality of Fraud

Fraud is like violence. Both will always be present because some people will always choose them as options. As with violence, the goal in countering fraud is not to eliminate it, because that is Utopian. The goal is to drastically reduce it and keep it away from your life.

What is fraud? It is not merely “dishonesty”–a word that is sometimes used as a synonym. Nor is it a breach of contract, which can occur between well-meaning people who then usually come to a settlement. In an anarchist framework, aggression is defined  as the usurpation of property—whether it is a person’s body or goods—without the owner’s consent. In crypto, the aggression is committed against goods or wealth. If it is taken through violence, such as in a mugging or a burglary, then it is straightforward theft. If it is taken through deception or stealth, then it is the type of theft called fraud. In fraud facilitated by a contract, there may be a bogus exchange of value; a person is assured that an expensive watch is a Rolex, for example, when it is a cheap knock-off. Or the exchange may happen on falsely-stated terms; the genuine Rolex is stolen property to which the seller has no title. The seller lies; the buyer believes; the contract of sale—explicit or implicit–is invalid because the values or terms were not agreed upon by both parties.

Before discussing fraud in crypto, it is important to note that the phenomenon may not be as common as many assume. The Australian Competition & Consumer Commission released a report on the level and types of scams that happened in 2017. Crypto-related fraud constituted 0.6% of the total. Each instance seems to draw media attention, however, because powerful forces use the accusation of fraud to call for regulation. Or, as a headline at Panda Security recently stated, “Cryptocurrency fraud is the exception, not the rule.”

I also know that for every scam, there are countless examples of cryptocurrency and blockchain technology being used responsibly to create opportunities, grow economies, and do good in the world. We need to remember that cryptocurrency fraud is the exception, not the rule.

The attention to fraud is warranted, but the conclusion of a need for state involvement is not. Inviting in the state—the greatest trusted third party scam in existence—is dangerous folly. Instead, people need to focus on the correcting the unsafe user practices that are revealed by every scam. They should stop opening their wallets and crypto to thieves, statist or private.

Consider the 2017 “mybtgwallet.com” scam. The website claimed to be an online web wallet for Bitcoin Gold, which was considered to be legitimate. Mybtgwallet.com offered users free Bitcoin Gold wallets through which they could check their balances, and use the website for one day for free transactions. The scam link was lent credibility by appearing briefly on the official Bitcoin Gold site—an act of incredible carelessness on the site’s part, to say the least. To take mybtgwallet.com up on its offer, users had to submit their private keys or recovery seeds. Of course, after they did so, the crypto in their wallets was forwarded to other addresses.

No one should have fallen for this scam but even some crypto veterans did. Coindesk reported that “more than $3.3 million has been stolen as part of an elaborate scam that took advantage of bitcoin users seeking to claim their share of the newly created cryptocurrency bitcoin gold. At least $30,000 in ethereum,$72,000 in litecoin, $107,000 in bitcoin gold and more than $3 million in bitcoin were confiscated.”

What are the lessons of the mybtgwallet.com debacle?

If the preceding lessons are repetitive, it is because they bear repetition. Remember: when crypto leaves your wallet, it is gone forever. That should at least be the assumption. The transaction cannot be reversed, and there is no insurance company to make you whole (although the crypto community should sell this service). As it is, victims rarely receive back even cents on the dollar, as the Mt. Gox victims did after years and years of strenuous effort.

The Biggest Message of mybtgwallet.com

Avoid trusted third parties, however convenient or alluring they may seem. They are the major point of vulnerability for fraud and other theft.

Third parties may be necessary for some purposes, such as converting between cryptos. If so, use exchanges or other services that require as little trust as possible. Many decentralized exchanges do not require keys or personal information beyond the absolute minimum of an email address and user name; prefer them over centralized exchanges that strip away all privacy. In your account, keep the least amount of crypto possible for as short a period as necessary to accomplish your goal.

The trusted third party to avoid the most is the state. Unfortunately, when massive fraud occurs, even people who should assume some responsibility for the theft call, instead, for government regulation. There is an irony here. One reason fraud happens is because of the statist mindset with which people approach investing and all things monetary. They are accustomed to guarantees of safety from the state, and many believe the guarantees are real. Fiat money is backed by the state and, by law, it must be accepted as payment. Bank deposits are insured; in the U.S., the Federal Deposit Insurance Corporation insures up to $250,000. Law enforcement operates fraud divisions that record reports of theft. In short, the state makes people feel safer than they should, and they neglect the due diligence that is the responsibility of every individual. Protecting your property is part of self-defense. The world’s most fraudulent trusted third party—the state–is not a remedy. It is not a reason to relinquish self-defense. It is a reason to learn how to be comfortable and skilled in exercising it.

[To be continued next week.]

Reprints of this article should credit bitcoin.com and include a link back to the original links to all previous chapters