According to pseudonymous co-founder of reference website Bitcoin.org, Cøbra, the group “received allegations of copyright infringement of the Bitcoin whitepaper by lawyers representing Craig Steven Wright.”

Wright has long insisted he is Satoshi Nakamoto, and so the legal logic tends to flow from that assumption. The whitepaper was ordered to be taken down.

In the early 2000s, conservationists used their helicopter to snap thousands of Pacific Ocean coastline photographs, from Oregon to the Mexican border. The point was to bring attention to reclamation and the dangers associated.

Do-gooders were stunned to learn diva Barbara Streisand’s palatial coastal mansion was inadvertently revealed in the picture series. Their attention was brought to this knowledge by way of a $50 million Streisand lawsuit against environmental photogs, insisting the offending image be removed.

The suit gained predictable media coverage both for its multi-million dollar charge but also due to being forwarded by a legendary moviestar and songstress. In other words, Streisand made sure her privacy was violated by her own actions. Soon, everyone knew what the estate looked like and where it was located. The boomerang phenomenon became known as the Streisand Effect.

Responding purely out of lawsuit fears in the recent whitepaper case, “Bitcoin Core developers scrambled to remove the Bitcoin whitepaper from bitcoincore.org, in response to these allegations of copyright infringement, lending credence to these false claims. The Bitcoin Core website was modified to remove references to the whitepaper, their local copy of the whitepaper PDF was deleted, and with less than 2 hours of public review, this change was merged,” Cøbra lamented.

Core developer Wladimir J. van der Laan explained, “i’m happy to maintain the bitcoin core code, but i will not personally be a martyr for bitcoin, it’s up to you as bitcoiners to protect it,” suggesting pulling down the whitepaper was done out of concern over liability and the cost of frivolous lawsuits.

so let this be clear: i'm happy to maintain the bitcoin core code, but i will not personally be a martyr for bitcoin, it's up to you as bitcoiners to protect it https://t.co/YrOBjSdzeH

Wright indeed has a penchant for appealing to courts in solving disputes. He’s gone after everyone from Roger Ver of Bitcoin.com to podcaster Peter McCormack and Twitter trolls such as @hodlnaut (among many others). His won-to-loss record leaves much to be desired, but the zero percent success rate appears to not have deterred Wright in the slightest, as Cøbra’s revelation shows.

Citing the Bitcoin project’s publication under an MIT license, along with the general open spirit under which the world’s most popular cryptocurrency was initially embraced and grown, Cøbra believes “there is no doubt we have the legal right to host the Bitcoin whitepaper.” The Bitcoin.org co-founder goes on to encourage others “hosting the whitepaper should follow our lead in resisting these false allegations.”

Not too much later, Cøbra urged, “Every major Bitcoin company needs to start hosting the Bitcoin whitepaper in solidarity. An attack on Bitcoin’s founding document is an attack on all Bitcoiners. This is the document that started everything, if Bitcoin has made your life better, then defend it.”

Every major Bitcoin company needs to start hosting the Bitcoin whitepaper in solidarity.

An attack on Bitcoin's founding document is an attack on all Bitcoiners. This is the document that started everything, if Bitcoin has made your life better, then defend it.

That call was heard.

Jonas Schnelli, Bitcoin Core dev and maintainer, announced his hosting of a copy. DC-based crypto lobbyist Coin Center obliged. Square Crypto is now providing a copy, and published it on Twitter in solidarity.

In support of the #Bitcoin Community we’re hosting the Bitcoin whitepaper here: https://t.co/nDXSS9NJHG

New whitepaper hostings continue to grow exponentially as of publication. 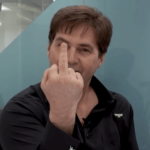