A Currency that Rises in Value Will Change Everything

In the early years of the Bitcoin boom, I attended a raucous and truly hilarious conference of newly rich digital titans. The year was 2014, I believe, the town was Miami, and Bitcoin had just hit $1,000. In those days, the ethos of the early investors was to spend. Like crazy.

After all, this goofy spendable token seemed to be growing on trees. One day your computer is grinding away “mining” magic money that no one used, and the next thing you know you have $100K in your paw. You did nothing to “earn” it other than volunteer some processing power. Why not live it up?

There was strange psychology at work in those days. That this tiny protocol worked defied belief and yet it was real. Let’s test just how real!

At this conference, yes, living it up was the way. Ferraris and Maseratis filled the Miami streets. People traded one for another using digital wallets on their smartphones – a trick made possible only under the influence. Liquor flowed like I’ve never seen. The music, the lights, the opulence. You could choose among multiple yachting outings with endless amounts of food, fun, and live music.

Those were the days.

Soon after, however, Bitcoin turned south. The $1,000 price sank to $335. There was sadness all around. All that celebration was for naught. The newly rich were not only not rich anymore. They were now stuck with all kinds of cars, boats, and houses that they could not afford to keep up. What happened to the great slogan “to the moon?” It felt in those days like magic internet money was turning to dust.

The whole thing was ridiculous. I watched Bitcoin go from $0 to $14 before I wrote my first public article about it, and soon it turned to $30. People were screaming that it was an insane bubble about to explode, which it did before reaching new highs again. I never saw $300 as low. Even $3 was something of a miracle, so far as I was concerned. Bitcoin had finally become the digital currency about which we had been dreaming for 15 years.

I never saw it as an investment so much as a technology. The price was incidental – but still rather…fun! It was the source of public fascination. Of course.

All these years later, we can see that the huge crashes of the past – which looked so scary at the time – are minor blips, barely discernible in the long-run pattern of up, up and up. Live through enough of these and you stop sweating it out. It has been for all these years until recently when the “3-steps-forward-2-steps-back” pattern changed into a firm $20K, then $30K, then $40K. Sure enough, Bitcoin seems to be taking steps toward being an alternative world-reserve currency, not soon but perhaps eventually.

Let’s look at the larger question of what this could mean for our lives. Bitcoin has performed for 12 years as a deflationary asset. This is to say that the value of the unit grows ever more valuable in terms of goods and services. This is the opposite of an inflationary asset like the US dollar, which is worth about 5 cents compared to its pre-WWI value, thanks to monetary mismanagement in which the Federal Reserve flooded markets with money to pay for government spending and debt and bailing out banking systems when they got in trouble.

If you are holding an inflationary asset, you have greater incentive to spend today rather than save, since you can reasonably expect the monetary unit to decline in value over time. You are also more likely to borrow and live beyond your means, because you service the loan in cheaper money than you recieve (all else equal).

How does this psychology change if you are holding a monetary asset that grows in value over time? Here you have an incentive not only to save but to seriously rethink the whole of your life habits. It influences whether you buy or rent, get a government job or take a risk in the markets, have children or not. All of this depends on one’s assessment of one’s future purchasing power, which is bound up with the anticipated value direction of a currency unit.

This is sure enough what happened to the Bitcoin community three years after that nutty conference when the digital asset had recovered its previous price expressed in dollar terms. Suddenly it became apparent that this thing would rise and rise. Those people who spent their Bitcoin like crazy – exchanging it for dollars or for goods and services – were now feeling a sense of regret. So too the many people who sold theirs ten years ago today when the value hit $1: people reasonably assumed it could never grow to be stronger than the world’s strongest paper currency.

With the inexorable rise of Bitcoin, and after the long march to $10,000 happened, the people with fancy cars and houses looked at them and wondered why they had done such a thing. Had they waited a few years before throwing away their magic money, they would have been ten times richer. Rich is good. Even richer is better. They learned a lesson in monetary economics.

This was when a new ethos suddenly hit the community. They became extremely frugal. They would look around at the junk in their houses and think what it could be worth in terms of Bitcoin. They rethought vacations. Shop in thrift stores. Move to a cheaper neighborhood. Buy a used car. Stop eating out.

Companies specializing in Blockchain tech began to look more carefully at their spending, curbing profligacy wherever possible. In other words, they began to think about the future, not because of a change in inner virtue but because of the very practical realization that a Bitcoin saved is a Bitcoin earned.

The Bitcoin rich began to live like the dollar poor.

That’s the point at which to be crypto-rich took on a completely different caste. The so-called HODL movement became fashionable (it’s a deliberate misspelling of HOLD or perhaps it stands for “hold on for dear life”). Rather than ramping up their lifestyles, they began to dial them back, turning spare dollars into crypto with an eye to the future.

And this went on for three long years during which time the price in terms of dollars danced up and down around $10K before breaking out. The less you owned, the more Bitcoin you likely held (though by now absolutely no one bragged about it).

Whether the reserve currency of society is inflationary or deflationary can have a major impact on the culture. A deflationary currency like Bitcoin rewards future thinking, the deferral of consumption, harder work and less profligacy, and a general turn toward saving and investment (hopefully in something besides more Bitcoin). Slowly increasing purchasing power over time rewards savers, creditors and investors vs. spenders and debtors. That’s good for prosperity.

With the exception of a few years during the hard times of the Great Depression, no one alive has experienced a predictably and dramatically deflationary currency or reassessed their lives in light of what that could mean for us.

Because of so much postwar inflation, we’ve taken it for granted that holding dollars alone is usually a bad idea. In the late 19th century, however, the expectation of using a currency of rising value was commonplace. As a result, people were indeed more frugal and that helped build prosperity, at least until the establishment of the Federal Reserve changed everything for the worst.

Maybe widespread ownership and use of Bitcoin and other cryptos can make a cultural and economic contribution to converting us from profligate to thrifty in the way our great-great grandparents could celebrate. After all, it was they, and the gold standard under which they lived, that set us on the course to building a modern and prosperous way of life that inflationary paper currency has done so much to reverse.

Why Buy Bitcoin When You Can EARN It? FREE GUIDE HERE!

What Are The Politics of Bitcoin? 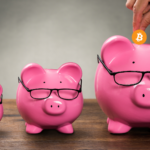 A Currency that Rises in Value Will Change Everything