US Domestic Terrorism as Pretext for a Coming Bitcoin Crackdown

They use phrasing such as deep state crisis actor.

Every other sentence is peppered with words like bikeshedding and woke.

They’re into citing abstractions, often regaling listeners and readers with the Pareto Principle and Poe’s Law. Don’t even get them started on the Overton Window.

Most consequential events can be traced back to Jews, Jewishness, Judaism.

Readers unfamiliar with American politics can be excused for not knowing figures such as Nick Fuentes and Patrick Casey. They’re minor players in what’s loosely considered identitarianism and ethno statism, US style, a teeny, tiny pseudo political not-quite movement.

Beginning as Identity Evropa around early Trump mania, the two helped to form a mostly underground and online college-aged set coalition. They champion restoration of an amorphous white pride, and it has caught-on enough to gain attention from progressive bloggers keen on becoming unglued at any hint of dissent.

Identity Evropa fizzled in the wake of Charlottesville, its members tattling on one another and doxxing each other. The already small but dedicated cadre then broke into factions out of pure self-preservation. Fuentes rebranded as America First and played for the uber-paleo conservative populist crowd buoyed by Trumponomics, nationalism, Christianity. Readers even slightly aware of that trinity can already predict US progressives’ response: shrill catastrophism.

Slowly, and then all at once.

Domestic terrorism in the United States is quickly becoming a rallying cry in the broader effort to find probable cause for cracking down on Bitcoin. The irony for Fuentes and associates is how that designation took hold during the later part of Trump’s term.

“The United States of America will be designating ANTIFA as a Terrorist Organization,” Trump tweeted in response to growing riots and protests throughout major US cities (that would extend long into and beyond the summer of 2020).

And by July of last year, a formal resolution did indeed make its way to the United States Senate. Calling for the Designation of Antifa as a Domestic Terrorist Organization entered the Congressional Record. Though the resolution did little more than languish as a hat tip to Trumpian social media bluster, it set the tone toward political dissidents.

Antifa remained unscathed, however, culminating in the Democratic Party presidential nominee and soon-to-be 47th President publicly dismissing such calls, such labels, when applied to the group.

Die, however, were cast. That ultimate cudgel, flinging the phrase “domestic terrorist” at a political foe, was now easy to pick up.

Without gaslighting too much, it strains credulity to see Fuentes and the former Identity Evropa leader Casey as more than philosophical and political eccentrics, nutty pamphleteers in the digital age.

For US progressives, however, one, much less two, of this sort is intolerable and rhetorically constitutes the end of civilization as we know it (I am not joking). They flip out over the likes of Fuentes and America First especially.

Focusing on Fuentes and his views is simply beyond the scope of this column. What’s important, thus far and for my purposes, is to understand what he and they represent: unpersons not welcome in polite society.

Suited and bullhorned, Fuentes did what Fuentes does. He jingo’d. He shouted. He yelled over applause breaks to Trumpers on 6 January 2021.

By all available evidence, he even marched to the Capitol from the Ellipse, bullhorned some more, and then called it a day as tear gas filled the DC air.

The Chainalysis 2021 Crypto Crime Report appeared about a week after, key parts of the investigation coming as a result of a Yahoo!News tip. In the report, Chainalysis singled out Fuentes among nearly two dozen groups reportedly sharing-in half a million dollars worth of Bitcoin donations.

“Nick Fuentes received 13.5 BTC — worth approximately $250,000 at the time of the transfer — making him by far the biggest beneficiary of the donation,” Chainalysis breathlessly documented.

Easiest way to get your first bitcoin (ad)

Fuentes was at the Ellipse. He was near the Capitol. Bitcoin was donated to Fuentes. Therefore! And so! Look!

“While there’s no evidence yet that Fuentes entered the Capitol — in fact, he explicitly denies entering the building,” Chainalysis begrudgingly acknowledged, buried deep in the piece (far enough down for journalists to ignore), “he was present at the initial rally and seen outside the Capitol as the rioting began.”

Fuentes even “promoted the rally that preceded the violence in the month before on social media” and, as a sure sign of guilt among progressive thinkers, “had previously been banned from YouTube for hate speech.”

Within a mere 48 hours of the Chainalysis flogging of the America First virgin, NBC News confirmed the Federal Bureau of Investigation (FBI) was in hot pursuit of Fuentes’ filthy lucre.

Shortly thereafter, Incoming Biden Treasury Secretary Janet Yellen was asked about cryptocurrency and terrorism during the run-up to her eventual confirmation.

Yellen answered in part about the need “to make sure that our methods for dealing with these matters, with terrorist financing, change along with changing technology,” singling out how “cryptocurrencies are a particular concern. I think many are used – at least in a transaction sense – mainly for illicit financing.”

For sure, such audible concerns from regulators and lawmakers have been omnipresent throughout Bitcoin’s history. Why is early 2021 any different? Aren’t all these law enforcement agencies and regulators just paper tigers, flexing for a gullible public?

What’s different this time is progressives steer two-thirds of the US federal government, Legislative and Executive. What’s also different this time is progressives now have the perfect excuse to act upon Bitcoin and crypto, handed to them by the Trump administration and the demonization of petty, small-time streamers such as Fuentes: domestic terror.

Lest readers believe this inaugural column is making too much of a few published pieces of hysteria, the Trump administration has been out of office going-on two months and neither the man himself nor his cabinet can go minutes without elaborate call-backs to the last four years. Events at the Capitol of 6 January 2021 will only fuel them further, deeper.

Just recently, the House Chairman of Homeland Security announced a sweeping lawsuit against the former President, naming associated so-called extremist groups as well, using a piece of legislation from 1871. One needn’t be a Trump admirer nor a fan of Fuentes to understand what’s coming, what’s unfolding.

The Capitol mob action is the gift that will keep on giving to US progressives through commissions, boards, non-stop investigations, and lawsuits. Bitcoin is poised to get a substantive mention if not greater scrutiny from the federal government as a result, and the historic speculative price run isn’t helping matters.

Keep close tabs on the next four years. They’re going to be among the most important in Bitcoin’s history.

The Kelso Report is published exclusively at Coinivore.com. Every Sunday, Tuesday, and Thursday, cryptocurrency veteran journalist C. Edward Kelso examines the ecosystem, documenting the ongoing struggle to bring about greater decentralized, peer-to-peer electronic cash and programmable money to the world. 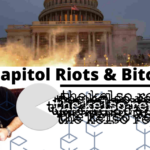 US Domestic Terrorism as Pretext for a Coming Bitcoin Crackdown