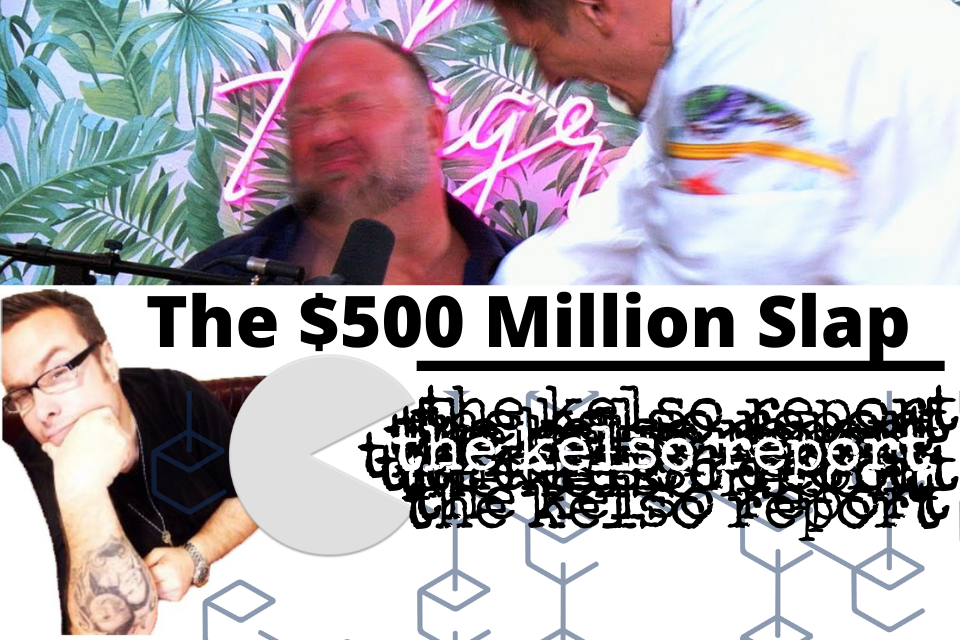 It’s the slap heard ‘round the world.

The podcast Flagrant 2, hosted by comedians Andrew Schulz and Akaash Singh, scored quite a guest, InfoWars co-founder Alex Jones. The near three hour episode became a booze-infused laugh fest, allowing Jones to let down his conspiratorial hair and get loose.

And loose Jones got.

At one point, as inebriation worked its magic, Jones was asked about his thoughts on cryptocurrencies in general and Bitcoin (BTC) in particular. Schulz wondered why the phenomenon has been allowed to explode seemingly without much government intervention or regulation.

In a rare moment of humility, followed quickly by a wry smile, Jones confessed to not knowing much about the subject. Both hosts, Schulz and Singh, gasped at Jones’ lack of an insider take, prompting Jones to pivot in real time.

“Obviously,” Jones told an eagerly awaiting room, “Bitcoin is totally controlled.” When pressed, Jones elaborated about having been approached by “globalist intelligence operations” a decade ago during a Bilderberg Group meeting.

Summer of 2011 would place the event in Switzerland as Bitcoin was breaking new price records of around $5.00, but Jones’ recollection has him somewhere North of London for the fateful encounter … which could mean the Bilderberg gathering of 2013 was held that year in the United Kingdom (the price would’ve been falling to around $50, give or take).

Regardless, Bilderberg bills itself as a candid debate event among Western elites. It has been in operation since the mid-20th century. Conspiracy theorists such as Jones often seize on Bilderberg as evidence of a world-controlling cabal, and the Bilderberg meeting does itself no favors by essentially keeping the public from its deliberations.

Jones describes himself having dinner during an unofficial connection with the event, near it at least, when financial gadfly and television personality Max Keiser approached. Keiser, host of the television program, The Keiser Report on RT UK, was a relatively early proponent of Bitcoin, often using his show and staking his personal reputation to the world’s first cryptocurrency.

Keiser is also known for his bombast and strong personality, similar to Jones, and evidently made an evangelical Bitcoin push at Jones during dinner. Jones describes his own demeanor as mostly dismissive, and Keiser apparently gave Jones 10,000 Bitcoin (the terms were not disclosed) that night … which ended up on a laptop.

Keiser, according to Jones, became exasperated at Jones’ lack of enthusiasm for Bitcoin, calling Jones a “fucking idiot” and storming off in disgust. “He wouldn’t talk to me for like a year,” Jones remembered.

“I lost the laptop,” Jones told Schulz and Singh, recounting salient details fuzzily. “Today, what’s 10,000 Bitcoins worth? A lot,” Jones emphasized. He later remarked having no idea what became of that laptop.

The price of Bitcoin as of publication is north of $57,000 per, placing that lost 10,000 BTC at $570 million. As the drunken hosts of Flagrant 2 mathematically deciphered closer to that astronomical number, Schulz blurted out, “You fucking idiot,” prompting laughter and a defeated grimace on Jones.

Jones then demanded to be slapped by Schulz, who playfully obliged. “I deserve it!” Jones shouted. “I swear to fucking God this is real!” He went on to implicate Keiser in having something to do with Russian president Vladimir Putin due to Keiser’s long-running show on the Russia Today network, owned by the government.

From there, the conversation veered into familiar territory as Jones insisted Bitcoin is a global conspiracy then in need of “front man,” alleging Tesla’s Elon Musk to be their latest recruit.

For his part, Keiser confirmed at least having given Bitcoin to Jones, tweeting, “One on the most startling chapters in #Bitcoin (the price was under $5 at the time).”