“The charges in the indictment are only allegations,” The United States Attorney’s Office District of New Hampshire acknowledged. “The defendants are presumed to be innocent unless and until proven guilty beyond a reasonable doubt in a court of law.”

In conjunction with what were described by witnesses as rather dramatic raids and subsequent arrests at multiple locations and homes, acting United States Attorney John J. Farley revealed the prompting of at least two powerful agencies to take action (FBI, IRS), was the fact six people “were indicted by a federal grand jury in New Hampshire and charged with participating in a conspiracy to operate an unlicensed money transmitting business and other offenses.”

Among them, mentioned most often in the official government press release (the only one charged with money laundering and who faces the stiffest sentence), was Ian Freeman, 40, of Keene, New Hampshire. Freeman is best known as the long-running host, brains, and elbow grease behind the radio show Free Talk Live (FTL).

Freeman and his show FTL are credited by Bitcoin.com founder Roger Ver as “the person I heard about Bitcoin for the first time from.” FTL has been around since late 2002, with Freeman at the helm along with various co-hosts, and is considered an anarcho-libertarian philosophical stronghold in New Hampshire where groups like the Free State Project (of which Freeman was once a member) and Free Keene (a Freeman-led spinoff) are very politically active.

The United States District Court District of New Hampshire Grand Jury formal indictment (1:21-cr-41-JL-01/069) details in 9 pages how operations morphed over the years into religious functionaries, including eventual ownership of FTL, with such titles as “the Shire Free Church, the Crypto Church of NH, the Church of the Invisible Hand, and the Reformed Satanic Church.”

The Grand Jury claimed Freeman and associates “knowingly and falsely represented to [banks] that [related] accounts were used to receive church donations and conduct church outreach when in truth and in fact, the accounts were opened to function, and did in fact function, as operating accounts for their unlawful virtual currency exchange business.”

Under Federal Investigation for Half a Decade

It appears Freeman has been under federal investigation for half a decade. The indictment insists Freeman and the five others since 2016 “operated a business that enabled customers to exchange over ten million dollars in fiat currency for virtual currency, charging a fee for their service” through “websites, as well as operating virtual currency ATM machines in New Hampshire.”

Agencies involved in the raid and investigation include the Federal Bureau of Investigation, the Internal Revenue Service, and the United States Postal Inspection Service in coordination with the Financial Crimes Enforcement Network (FinCEN, division of the Treasury Department).

Coinivore contacted Freeman’s girlfriend, Bonnie, who was with Freeman when federal law enforcement raided early morning of March 16, 2021. She characterized the arrest action against Freeman as disproportionate, complete with broken glass and a loud, chainsaw-sounding drone, along with agents pointing firearms at the pair. She noted computers and equipment necessary to the operation of Free Talk Live were confiscated by law enforcement.

Hilary Sargent of The Informant tweeted Freeman’s March 19, 2021 Zoom detention hearing. Prosecutors referred to him as a “sophisticated criminal” who made some $10 million in cryptocurrency trades, disclosing a fraction, in violation of federal law. As a result, Freeman faces a minimum of 10 years to a maximum of life in prison, is a flight risk, and so the prosecution wanted him held in custody through the trial.

Sargent revealed $178,000 cash in a safe, 26 firearms, 2 silencers, and thousands of rounds of ammunition were confiscated by law enforcement in the raid.

Freeman’s attorney argued how he is a conscientious New Hampshire resident, and even though he’s had misdemeanor scrapes with the law, he’s always made court dates and has no history of violent criminal activity. Freeman, according to Sargent’s account of the hearing, was aware of the FBI/IRS investigation, and is “willing to surrender his passport and is amenable to a tracking device. He is also willing to pull back from his crypto business.”

As of March 19, 2021, no ruling was made as to whether Freeman will be let out of jail pending trial. He remains behind bars until the judge decides.

The Crypto 6 Legal Defense Fundraiser was recently “launched to raise funds for their legal defense. Free Talk Live co-host, Mark Edge will custody the funds and allocate them evenly to each of the defendants’ legal defense efforts,” a Flipstarter page informed.

A website landing page was also spun-up, The Crypto 6, which includes local television coverage of the raids. 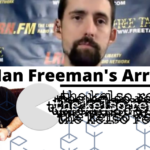