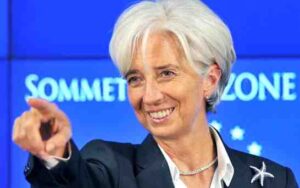 Christine Lagarde, the Director of the International Monetary Fund (IMF),  has previously warned central bankers not to ignore Bitcoin. Now the IMF head has stated that “it’s time to get serious about cryptocurrency.”

“I think that we are about to see massive disruptions,” IMF Managing Director Christine Lagarde told CNBC during an interview.

When Lagarde was asked whether she agreed with JPMorgan Chase CEO Jamie Dimon’s comments that Bitcoin is a “fraud,” she added it’s important to look at the broader implications of technologies like digital currencies and not to categorize them as speculation or Ponzi schemes.

“I think we should just be aware of not categorizing anything that has to do with digital currencies in those speculation, ponzi-like schemes,” she said. “It’s a lot more than that as well.”

Dimon has recently stated that he won’t say another word about cryptocurrencies, CNBC reported. S0 let’s all hope that he keeps his word since he doesn’t understand what he is speaking about.

When asked if the IMF would develop its own cryptocurrency someday, Lagarde revealed the IMF’s Special Drawing Right (SDR), an internally developed currency that functions as an international reserve asset swappable with international currencies, could soon incorporate blockchain technology for increased efficiency at lowered costs.

Two weeks ago, Lagarde spoke at the Bank of England’s conference in London where she stated cryptocurrencies like Bitcoin could give central bank-issued currencies and existing monetary policies “a run for their money.” She further called on central bankers to “be open to fresh ideas” and that it “may not be wise to dismiss virtual currencies.”

In its early 2016 staff paper, the IMF stated the central bank considers distributed ledgers to have the capability to revolutionize the financial sector through cost reduction and deeper financial inclusion in the long term.

Earlier this year the IMF released a report that provided a detailed analysis of cryptocurrency technology, and the potential implications that it may have for lawmakers, governments, and financial institutions who will seek to regulate the FinTech.