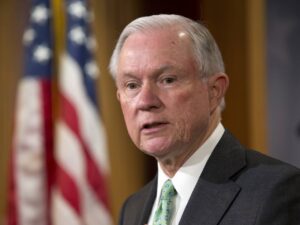 U.S. Attorney General, Jeff Sessions, testified before the Senate Judiciary Committee on the Judiciary about the darknet and that “Bitcoin is a big problem.”

At three hours, forty-three minutes and thirty seconds into Sessions’ testimony, ranking member Dianne Feinstein, Democrat from California, announced her line of questioning would focus on “the dark web.”

“Opioid Dealers Embrace the Dark Web to Send Deadly Drugs by Mail,” Senator Feinstein began, “it seems to me, the dark web, being used by criminals, is going to grow in the coming years,” Citing a New York Times article.

The “dark web” refers to the “deep web,” otherwise known as onion urls only accessible on the Tor (The Onion Router) network.

“If you have any plans to address it,” she continued, “or would you begin to think about it so that we might have some conversations on this, because I think there’s a lot of concern out there in law enforcement communities,” the Senator emphasized.

“We are very concerned about that,” Sessions stated. “The FBI’s very concerned about that. They did take down, I think, the two biggest, dark websites. This last one, Alphabay, we took down recently. They had 240,000 sites where individuals were selling, for the most part, illegal substances or guns on that site, including Fentanyl. And, they use bitcoins and other untraceable financial capabilities, and it is a big problem,” he said.

Alphabay Market was just one of these marketplaces that was accessed through the Tor network. The darkweb site was raided during a coordinated, international, law enforcement effort known as Operation Bayonet. Authorities accused Canadian Alexandre Cazes of being the leader of the site. Cazes later died mysteriously in a Thailand jail just days after the accusation leaving many to believe he was murdered.

Sessions has vowed to go after darkweb marketplace sites that use cryptocurrency to make transactions of products. But little does Sessions realize Bitcoin is no longer being used on the darknet, as the majority of darkweb sites and users have shifted towards using the privacy-centric cryptocurrency Monero over the privacy lacking Bitcoin. In other words, Sessions is years late to blame Bitcoin for the ability to purchase illicit products.

“Make no mistake, the forces of law and justice face a new challenge from the criminals and transnational criminal organizations who think they can commit their crimes with impunity using the darknet. The darknet is not a place to hide. The Department will continue to find, arrest, prosecute, convict, and incarcerate criminals, drug traffickers, and their enablers wherever they are. We will use every tool we have to stop criminals from exploiting vulnerable people and sending so many Americans to an early grave. I believe that because of this operation, the American people are safer – safer from the threat of identity fraud and malware, and safer from deadly drugs,” Sessions said at the time of announcing the raid.

At the time of this writing, Bitcoin seems to be unaffected by the news which may show that the market is starting to expect this type of negative news from the centralized establishment the cryptocurrency seeks to displace.