In the interest of full disclosure, I am an intensely simple man.

Simple as simple can get. The more a thing is bedazzled or over-engineered, the less inclined I am to trust it.

Not exactly sure why that should be the case with regard to my temperament, but I’ve come to embrace it as a bias to guard against as I go about my professional work and as an investor.

Proof of Work Proved Itself

And so it was upon discovering Bitcoin so long ago and its Proof of Work (PoW) consensus mechanism that everything about it fell into place. Sure, the SHA-256 cryptographic hash algorithm appeared to be solving worthless math problems for the sake of it (a kind of strange abstract dance to get a reward), but it underpinned a great economic theory.

To prevent double-spends and minting coins willy-nilly, PoW was a fine solution. An added benefit to my fossil fuel, internal combustion engine-favoring mind was its use of hardware and in-real-life electricity.

Where some immediately thought such aspects of PoW were bugs, I saw them as features.

Over the decade-plus of Bitcoin’s PoW engine, it has proven resilient and something of a preferred way of doing cryptocurrency (if speculative price and market capitalization mean anything).

That doesn’t mean there haven’t been critics. In fact, analysts have long predicted PoW would eventually become a liability as mining and mining pools and mining manufacturers centralize power. Mining itself, they contend, would become too big a business for the average joe to ever substantively participate.

Bitcoin would, they predicted, become a plaything for corporate interests … the same that tend to favor legacy finance and the banking industry from which peer-to-peer electronic cash was meant to escape.

I won’t bore readers with the most popular bromide against PoW, the anti-environment tag, but it’s worth pointing out dependency upon electricity in the way PoW needs, and the modern reality of how such utilities are state controlled, is indeed a fragility or could very well turn out to be.

My own cynical prediction on that score is over the next four years, the current US presidential administration will use climate change as a cudgel to pass legislation against Bitcoin … and PoW will be a key piece of evidence for them.

No Solutions, Only Tradeoffs

No too long after Bitcoin became a viable thing, however, lively discussions anticipated many of the above debates and phenomenon we’re seeing today in the cryptocurrency ecosystem.

Arguably the earliest proposed alternative to PoW was on the BitcoinTalk forum. Member QuantumMechanic in July of 2011 wondered aloud “whether a transition from a proof of work based system to a proof of stake one might happen,” explaining how “instead of your ‘vote’ on the accepted transaction history being weighted by the share of computing resources you bring to the network, it’s weighted by the number of bitcoins you can prove you own, using your private keys.”

QuantumMechanic even hinted at something like what would become Delegated Proof of Stake (DPoS). The benefits of a Proof of Stake (PoS) consensus system might “out-compete a proof of work one due to much lower transaction fees, since its network wouldn’t need to support the cost of the miners’ computing resources. (Note that the vote delegation scheme has bandwidth/storage overhead that would offset these savings by some amount which would hopefully be relatively small.)”

In addition, PoS might possibly allow for “quicker, more definite confirmation of transactions, depending on how it can be implemented,” could be ultimately “be more trustworty, since it would accumulate in a bottom-up fashion via a network of trust, instead of in the somewhat arbitrary way it accumulates now,” even accounting for vote-buying, he stressed.

Importantly, QuantumMechanic argued, PoS “would remove the physical point of failure of bitcoin mining equipment, which can be confiscated or made illegal to run,” and it might “be used to provide stakeholders a means of making their voices heard (via the delegated voting system it establishes) when it comes to proposals for software updates and protocol changes.”

Proof of Stake is Having a Moment

The notion took off and set the developer world afire. Even a nascent Vitalik Buterin back in 2013 referred to King as “probably the single most original altcoin developer out there.” Proof of Stake was having a moment.

Intervening years would see PoS grow and gobble up the new-new thing in crypto.

In fact, as of early 2021, the top ten cryptos by market cap count 30% of projects as using some form of PoS. That number gets to half (arguably more) as Ethereum moves to ETH 2.0, and Stellar, in the 11th spot, lurches forward.

And I haven’t even touched decentralized finance (DeFi), which is a kind of PoS variant.

I am still sorting out what appears to be a tidal wave of innovation in the PoS world. I cannot tell just yet if it’s a digital space just naturally continuing to move into a completely digital context, escaping entirely from real life.

Again, I am a simple man.

For now, I appreciate the variety, the experimentation, and I am glad we have choice and competition, all of which appear to be the lifeblood of keeping cryptocurrency viable. 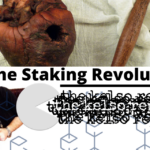