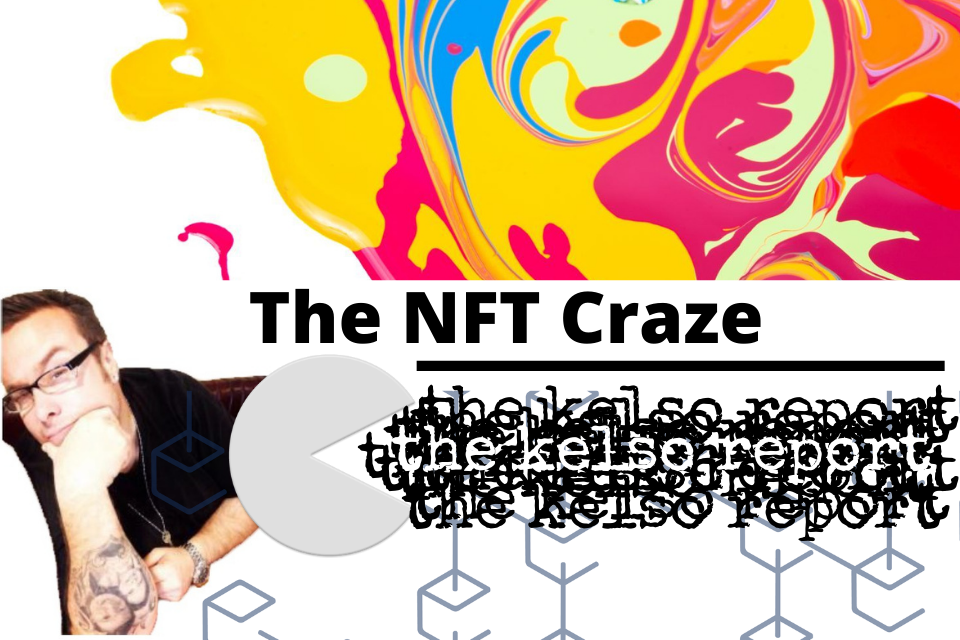 “I just contributed to http://flipstarter.waifu.camp,” developer @BlockpartySh tweeted. “This is Bitcoin Cash’s time to shine. Let’s show what we can do with NFTs that cost a penny to make and send.”

A piece from famed street artist Banksy reportedly was offered in a NFT event, burning a physical copy of the work, Morons.

Music acts such as Portugal. The Man, Shawn Mendes, Grimes, Mike Shinoda, and Kings of Leon have all dabbled in NFTs recently.

Sales of non-fungible tokens continue to break records, and more mainstream collectors are starting to take notice. The difference is hype around cryptocurrencies themselves is not what’s front and center.

The stand-alone piece is often what’s discussed. Cryptographic elements and the machinery enabling them linger quietly in the background unnoticed.

That soft-selling of the tech seems to have caught on. In fact, clearinghouse site nonfungible.com published their Non-Fungible Tokens Yearly Report for 2020, showing a nearly 100% growth in active NFT wallets, and a 4X gain in related transactions, totaling more than a quarter billion dollars last year.

NFT critics are often very loud and dismissive, harkening back to the Bitcoin (BTC) early fads of creating so-called colored coins. As a project, BTC proved less hospitable for young iterations of what would become NFTs, as developers cited storage size worries and an assumed frivolity perhaps distracting from BTC’s ultimate use-case.

The history of BTC as a first mover often proves innovations proposed through the world’s oldest and most popular crypto find their way to other chains, especially Ethereum (an inside joke is that Ethereum is the research and development layer for BTC).

And by 2017, the notoriously playful and innovative developer community comprising Ethereum (ETH) evolved that colored coins notion into something closer to what we now consider NFTs, CryptoKitties. The phenomenon grew, part kitsch, part rebellion against BTC creative stifling.

CryptoKitties became so popular and fun, however, they ended up taxing the Ethereum network, creating congestion, and fueling accusations of crypto as ultimately not being a serious pursuit sober enough to take-on traditional finance in any meaningful way.

But it was too late. NFT mania was out of the bag. Ethereum found mostly temporary workarounds to alleviate network clogs brought about by NFTs, and CryptoKitties showed there was a market for such assets.

Openness is an Advantage

Those paying closer attention realized NFTs were more than an immature protest. They could and probably would be used to develop the likes of a crypto collateralized loan industry, for example, and more, … much more.

Ethereum was able to capitalize on NFT mania because of its community’s openness to new ideas and allowing for experimentation. The entire crypto token economy, ERC-20s, etc., is a testimony to this aspect of what makes Ethereum such a powerful project.

Openness has also led to the perception, of course, that Ethereum is too large of a ship to wield in any real focused direction. It’s simply too all over the place, and once investors get a sense of that seeming chaos, they head for the calmer waters of a project like BTC.

But for now, openness and being playful is creating incredible new markets, driving adoption, and spurring interest in the overall crypto ecosystem.

Bitcoin Cash (BCH) could be in a catbird seat relative to the conservative versus permissive development battles between BTC and ETH.

Unlike BTC, the BCH development community doesn’t mind innovation. Arguably, the entire reason for BCH’s forking from BTC back in 2017 rests on bigger blocks allowing for a kind of creative infrastructure not capable on BTC.

BCH also comes with the selling points of BTC’s economic model. Unlike Ethereum, BCH has a hard money cap of 21 million coins, mirroring the famed BTC inflation schedule on that score. And with bigger blocks, BCH has considerably lower transaction fees, faster confirmation times, beating out both BTC and ETH handily.

A sticking point is how, for whatever reason, Bitcoin Cash failed to jump onto the token explosion when it might have counted a few years back. It has since rectified that snail’s pace, favoring the Simple Ledger Protocol (SLP) token format, but it’s safe to point out ETH still has the token market all but locked up for now.

Still, gas fees for Ethereum are often through the roof. They’re making it very difficult for NFT creators and sellers, and that could become a major issue … and soon. The ETH community at one point instinctively understood high transaction fees would clobber growing markets and price out important contributors, but it now seems divided on the issue.

“The NFTs are booming right now on the Ethereum chain with unprecedented auctions worth tens of millions USD,” lead developer Pat from BCH-centric NFT project, Waifu Camp, urged in his fundraising pitch. “On the other side of the spectrum are cheaper NFTs which can not be moved as easily on Ethereum due to very high network fees. This is where BCH can truly shine! And now is the moment to build the infrastructure and tools to enable the NFT business ideas to be implemented easily. This is why I am willing to generalize and open source the project, provide help and info support for the developers willing to build on top of it.”

Australia-based developer Jeff Rufino went so far as to publish a quick do-it-yourself guide for the Bitcoin Cash community looking to participate in the NFT craze. And in about five steps, Rufino shows how relatively easy it can be done using an SLP wallet.

This all comes about a month after NFT platform Sweet inked a deal with Bitcoin.com to distribute “digital collectibles and digital merchandise” by leveraging SLP tokenization on the BCH network. They’ll provide “blockchain digital collectibles [and] provide consumer and entertainment brands with a previously-unseen opportunity to drive new revenue, create one-of-a-kind consumer experiences, and increase consumer engagement to unprecedented levels,” the presser insisted.

Perhaps the Bitcoin Cash community learned from the late response to tokens, and is now set to capitalize on what makes BCH distinct and valuable. A combination of those rushing to the NFT market, congestion and high fees on Ethereum, could mean the next big NFT thing might find its way onto the Bitcoin Cash network … if only out of economic necessity.

And once users get a taste of the speed and low cost of using BCH, that really might be the push Bitcoin Cash needs to get its long overdue respect.