One popular critique of bitcoin is energy cost per transaction. This doesn’t begin to capture bitcoin’s massive energy savings compared to fiat currency.

Bitcoin’s cost per transaction is well known, and often critiqued; one article in Wired magazine called bitcoin “[a] big middle finger to earth’s climate.” This is because bitcoin’s security, redundancy, and architecture are more energy intensive than traditional payments relying on a single point of failure.

Comparing the energy of a single transaction barely scrapes the surface of the dollar’s carbon footprint, which includes the entire financial infrastructure supporting fiat—8.4 percent of GDP in the US alone, slightly behind manufacturing. This includes 80,000 bank branches, 470,000 ATMs in the US alone, and forests of skyscrapers towering over most cities on earth.

Alas, that’s still only the beginning. Because paper money allows governments to print unlimited amounts of debt, that causes various collateral damage including inflation, recessions, and trillions in wasteful spending or endless wars whose costs are hidden by debt financing. These all, of course, carry catastrophic human costs that can only be imperfectly expressed in a carbon footprint.

Still, we can take a stab at addressing that disconnect by estimating the carbon footprint of just one element of fiat collateral damage: the modern recession.

First, how does fiat money cause recession? This was well known in economics for centuries before the Keynesian dogma turned mainstream economists into court jesters.

The key element is that central banks push interest rates below the market rate, flooding easy money into the economy. This boom gradually sparks price inflation, at which point central banks slam on the brakes and jack up rates, tightening money. That whipsaw leads to a mass extinction of low-quality projects funded by easy money.

The end result is a boom-bust cycle that, like a tissue fire, burns too bright and too short, leaving behind ashes.

How does bitcoin fix this? Bitcoin takes purchasing power out of central banks’ manipulation space, dulling their ability to cause cycles. If enough dollars are sold for bitcoin, this drains that space until central bank manipulation no longer sends the entire economy into recession.

How to translate that into carbon cost? We have a very elegant instrument connecting the two: the energy cost of a dollar of GDP. Because every watt that humans use is to achieve some goal—to seek “a more satisfactory state of affairs”—it means we can estimate the carbon footprint of a dollar of lost wealth, specifically how much energy it would take to rebuild that wealth were it destroyed. Tally up the dollars lost in a recession and we can estimate the carbon footprint.

So let’s plug in the numbers and compare bitcoin to the dollar.

First, what’s the carbon footprint of bitcoin today? This is trickier than it looks, because a large share of bitcoin mining is powered by green energy. Smart Energy says 39 percent of bitcoin energy is renewable, while the Global Cryptoasset Benchmarking Study estimates that three-quarters of cryptocurrency mining uses some renewables in its energy mix. Either way, bitcoin is far greener than the rest of the economy, which averages 11 percent renewable use.

A big reason why bitcoin loves green energy is that bitcoin mining can be located almost anywhere on earth, while renewables are often located in strange places like the Himalayas, the Sahara, or the Quebec tundra.

This means that bitcoin can use otherwise useless energy, and it also means bitcoin miners actually “bootstrap” new renewables, paying the operating costs until regular customers can relocate. As even a hostile article from Vox admits, “Many renewable power generators are so poorly located and underused that mining Bitcoin has become the only viable use for that electricity.” Without bitcoin mining, that energy may have just been flushed.

Still, for now we’ll ignore bitcoin’s green preference and just take the total, because, as we’ll see, it’s not even close. As of March 22, 2021, the widely cited Digiconomist estimates a total energy use for bitcoin of 86.1 terawatt hours (TWh) per year, comparable to Switzerland’s 8.5 million people, for the perhaps 100 million people worldwide who use bitcoin. In terms of nationality, given that 19 percent of bitcoin nodes are located in the US, Americans might account for roughly 19 percent, or 16 TWh, of that usage.

So that’s the cost: 86 TWh per year, of which perhaps 16 TWh is Americans.

Now, it’s central banks’ turn: What is the energy cost of a recession? It’s fitting that our most recent recession, in 2008, is the very event that drove “Satoshi Nakamoto” to create bitcoin.

Get $10 in FREE Bitcoin with your first purchase!

Outside the US, many countries in Europe suffered even larger drops in GDP, while other countries, such as China, suffered little. To get a rough sense, Credit Suisse estimates that 31 percent of global wealth is held by Americans, so one might multiply America’s $11 trillion by about three to get worldwide losses.

Next, we can put an energy cost on those trillions. According to the US Energy Information Administration, in 2018 it took about 5,000 British thermal units (Btu) to produce a dollar of GDP. The World Bank gives similar estimates for the rest of the world, at 5,200 Btu per 2017 dollar. There are 3.4 Btu in a watt hour, so that converts to 1,500 watt hours, or 1.5 kilowatt hours (kWh), per dollar.

Put differently, it would take between 500 and 1,000 years of mining just for bitcoin to match the carbon cost of the 2008 recession alone. Add in the other 17 recessions the Fed has created in the past century alone—one every 5 years—and that’s an awful lot of carbon. Indeed, divide that 2008 recession footprint by a recession every 5 years and you get an annual recession carbon footprint about 100 to 200 times higher than bitcoin.

Several fun implications follow. First, that central banks are vastly more polluting than bitcoin, indeed more polluting than the worst industrial offender you could imagine. Second, this estimate implies that if bitcoin makes it harder for central banks to cause recessions, it could pay back every watt many times over. For example, if bitcoin reduced the odds or magnitude of central bank recessions by just 2 percent, bitcoin would actually save us far more energy than it uses.

Of course, considering recessions destroy millions of lives in addition to the evaporated wealth, it sounds like a fantastic bargain. Throw in the possibility that, by reducing central bank manipulation, bitcoin could help limit inflation, prevent Wall Street bailouts, and reduce unnecessary wars with carbon footprints all their own, it’s pretty unbeatable.

Now, there is a second, more sophisticated, line of attack which admits that fiat is polluting but argues for other cryptocurrencies that use less energy. These alternatives might be “proof of work” altcoins with smaller rewards, or they could be “proof of stake” coins that replace energy with capital deposits.

While these alternatives could well use less energy, at the moment we simply don’t know if either is secure enough. After all, if bitcoin is already 100 times greener than fiat, trying to eke out another 1 percent in savings while putting the entire project at risk would be picking up carbon pennies in front of a fiat steamroller.

Given we live in a world of irresponsible bankers and still immature altcoins, for now bitcoin remains the safest bet for reducing the enormous energy wasted rebuilding our economy every 5 years. So, if you really do prioritize the environment, stop obsessing about altcoin deck chairs and come help us steer around the fiat money iceberg.

Source: Mises
Why Buy Crypto When You Can Earn It? FREE GUIDE HERE
Post Views: 1,484
0
Shares 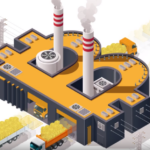